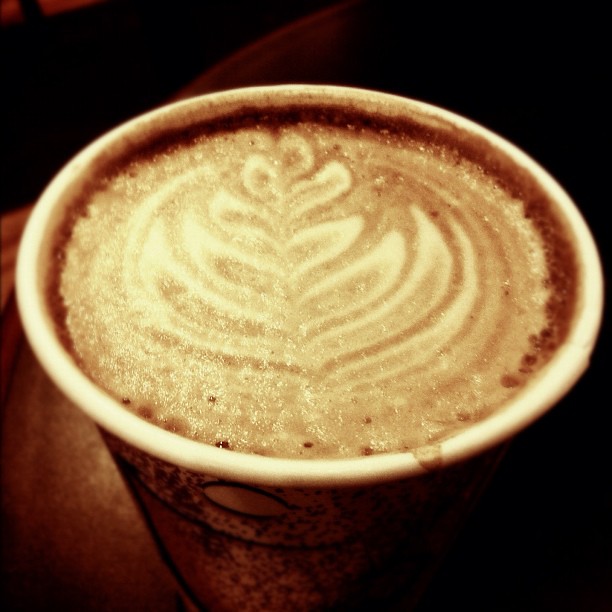 At this very moment I’m sitting at a Starbucks sipping on a pumpkin spice latte (go ahead and judge me).  As the sugar rush and caffeine hit, I’m gazing at a window that overlooks a busy street, like any busy street in any town, with a grocery store, a Taco Bell next to a Wienerschnitzel, and cars zooming past.  But on this day there is a child’s sticky handprint on the glass window, ghostlike because of the way the sun makes it glow.  It appears 3-D, hovering in the air.

The fine lines in the fingertips make wispy curves, and I ponder the moment that the child slapped his hand against the window before being tugged away by a parent.  My imagination conjures the scene:  a mother sipping coffee with a friend.  The two are engrossed in a conversation while their children scramble around the table.  First sitting and shoving a cinnamon roll in his mouth, then clamoring to the floor in a giggle, the toddler expresses complete disinterest in the conversation of the grownups and complete fascination with the strange world of Starbucks.  He glances outside, sees a dazzling and noisy world, smiles broadly.  He then waddles to the window and scales a chair.  With glee he slaps his hand against the window.

Startled, the mother rises while continuing to talk to her friend.  She wraps her arms around her son and pulls him back.  “No!” she commands, while conversing fluently.  He frowns–doesn’t understand why this forbidden fruit is denied.  And so he struggles to return to the window.  The two wrestle for a while, until the mother gets frustrated.  “I said, no!”  His frown turns to a tantrum.  She’s now embarrassed as she feels the stares of the mellow coffee drinkers.  Time to go.

Now here I sit, enamored with this unique thing of beauty created by the toddler.  There’s not another handprint in the world exactly like it.  The image represents so much potential.  It displays innocence, a strong will, creativity, intelligence, in short, the image of God–and yet it was produced by a human, and therefore very fragile, for it will soon disappear with a spray and a wipe.

The image of God seems to be a popular topic, lately.  I think it has to do with the increased interest in social justice.  Recently I attended a conference where a stream of innovative business/ministry entrepreneurs were paraded on stage to inspire us with their creative approaches at reducing suffering the world.  And almost every one of them said at some point, “I believe people are created in the image of God.”   They wouldn’t go into detail about this, but it seems they meant that the image of God grants dignity to the person, making them valuable and worthy of our efforts to help them.

And then at the end of the conference one of the final speakers, perhaps wanting to stand out in some way, said, “I too, believe in the image of God, but we do have a fallen nature.  Both are true.”   Given the context of his message, what he meant by this was that though there is great potential for good in humanity, there is also great potential for evil, so that we are sometimes drawn toward the dark side of our nature.  In other words, this speaker was reminding the audience that though we have this beautiful image of God in us, we also have this bad-boy attitude that tends to mess things up.

In fact, “mess ups” tends to be the dominant image of ourselves in the church.  We put it in our creeds, “We acknowledge man by nature to be blind, darkened in understanding, and full of corruption and perversity of heart….”

And we preach it in our sermons,

Your wickedness makes you as it were heavy as lead, and to tend downwards with great weight and pressure towards hell; and if God should let you go, you would immediately sink and swiftly descend and plunge into the bottomless gulf, and your healthy constitution, and your own care and prudence, and best contrivance, and all your righteousness, would have no more influence to uphold you and keep you out of hell, than a spider’s web would have to stop a falling rock.  (Jonathon Edwards, “Sinners in the Hands of an Angry God”)

And so, if both are true, we are mess ups inhabited by the image of God, where does this leave us?  Perhaps where the poet Edward Young, a favorite of hymn writer Charles Wesley, has put us: in tension between where we are and who where want to be.

How poor? How rich? How abject? How august?
How complicat? How wonderful is Man?—
An Heir of Glory! A frail Child of Dust!

Note: this was an excerpt from my new book, From Eden to Heaven: Spiritual Formation for the Adventurous. If you enjoyed it, please check it out!